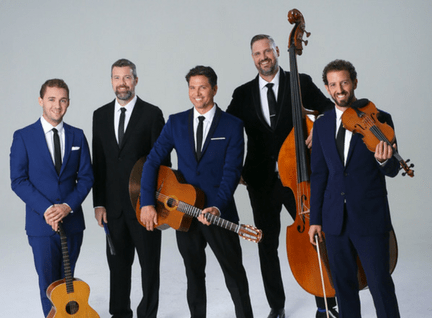 The Black Market Trust is a five member jazz band based in Los Angeles. Since the 2012 release of their all instrumental debut album “The Black Market Trust,” a milestone in the genre of gypsy jazz, the band has gone on to record two more albums, maintain a busy touring schedule, and have their music featured on TV shows like the ABC television series “Happy Endings” and the Hulu original program “Casual.”

The band features the Django Reinhardt inspired gypsy sound of acoustic instruments, and infuses classics from the Great American Songbook with intricate vocal harmonies inspired by The Beach Boys, and other artists influential to the group. Their sophomore album “II” featured a Top Ten hit on the Adult Contemporary charts, a signature version of “Route 66” 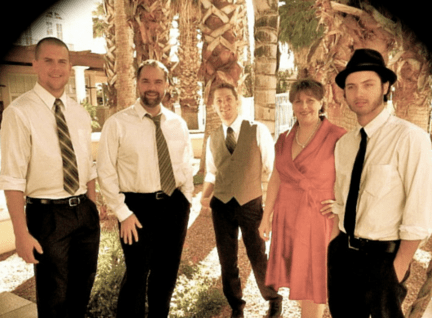 Blue Renditions features our 2006 Great Lady of Jazz, Dr. Sherri-Lynn Colby. Sherri, who hit the jazz scene at age 14 as the “Sirene of the San Joaquin,” has certainly grown up!

Sherri’s cabaret style allows her to establish intimate contact with her audience. Her maturity in life and music makes for sweet listening, with a bit of soul searching thrown in for good measure. Sherri’s husband Matt rounds out the group with a serious face…but watch for the imp-grin that flits across occasionally! Expect vocal jazz with synergistic instrumentation. 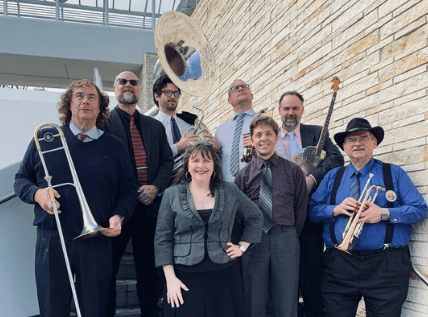 The Blue Street Jazz Band is one of the most innovative groups in traditional jazz. The band earned the reputation as The Bad Boys of Dixieland for their eclectic tastes in music. At any performance the audience is liable to hear various styles of music including swing, Mardi Gras, folk, marches, waltzes, Latin music, and hymns. 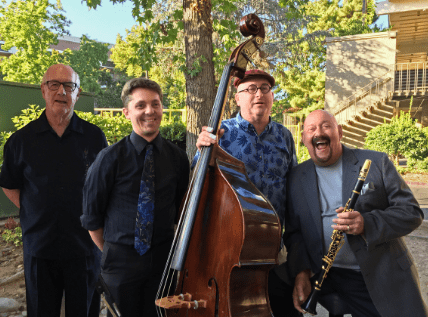 This is a group that has become one of the favorites on the festival circuit the last couple years. Thanks, in part, to Mr. Draga’s twisted sense of humor and playing style. It’s always a good show with these very talented artists and we are thrilled to have them here in Sun Valley.

Bob is also a guy that really gets around (no pun intended) and you are likely to see him show up just about any place music is happening. 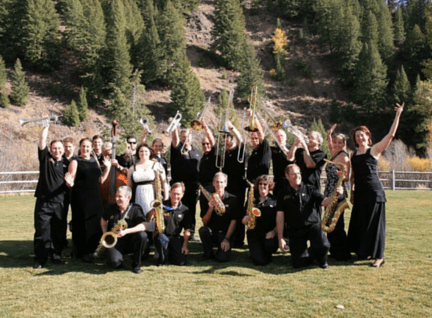 Boise Straight Ahead was formed in 1997. They love the big band sound and the uniquely American music that honors the many big bands that have played this music in the past. They have focused on playing community events in the Treasure Valley and have donated more than $55,000 in performance fees to local charities.

This all volunteer army is demonstrating at every opportunity their passion to keep this music alive and we all get to benefit from their hours of dedication. A must see if you love the big band sound. Faithful renditions of the Big Band Era. They are great for listening or dancing. 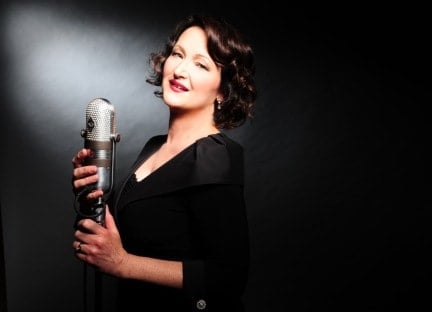 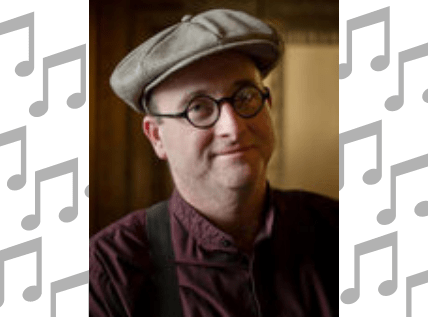 Clint Baker is a multi-instrumentalist based in the San Francisco Bay Area. Horne, bass, drums, and clarinet. He is also a bandleader and jazz educator, having taught with The Jim Cullum Jazz Band at the Stanford Jazz Camp in California. He has been teaching jazz history for over ten years to many different age groups.

Mr. Baker has performed with a wide range of artists such as: Narvin Kimball, Rosemary Clooney, Leon Redbone, The Humphrey Brothers, and Dan Barrett. Besides his appearances on Riverwalk Jazz, Clint has been featured on numerous radio programs such as Sunday Night Sweets and The Annals of Jazz.

For over a decade, Clint Baker has led a New Orleans-style jazz ensemble at the Cafe Borrone in Menlo Park, California. For the past three years the group, comprised of band leaders and key members of world-class traditional jazz bands, has met at Cafe Borrone on Friday nights (when not touring) to perform to the delight of the audience and themselves.

Mr. Baker has enjoyed mentoring young musicians in recent years and has worked in the field of jazz history. He has hosted a traditional jazz and swing radio program called ‘Breakfast, Dance and Barbecue’ since 2014 on KCSM Jazz 91 in the SF bay area, and worked work for the San Francisco Traditional Jazz Foundation at Stanford University for a jazz online exhibit.

Mr. Baker continues to travels the world playing jazz regularly as a soloist and all star sideman. 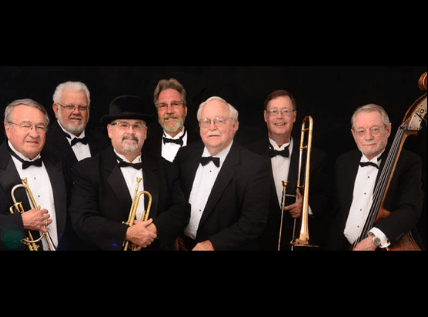 Cornet Chop Suey will give you an exciting jazz and swing show every time, presented with gusto and enthusiasm. With a century of songs in their repertoire, from the rags and Dixie of the early 1900s to contemporary jump, jazz and swing, their high-energy front line and powerful rhythm section produce an exciting new sound and approach that is a proven crowd pleaser. 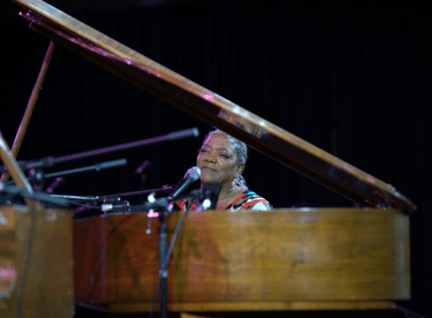 This irresistible lady can belt the blues one moment, and whisper and whine the next. Her impeccable vocal styling captures the imagination. Yve greets her website fans by saying, “Hello, I’m Yve Evans. Welcome to my world. Here in Evans-world we sing, dance and have a Great Time!” That about sums it up. Moving vocals with a modern twist and a touch of humor. 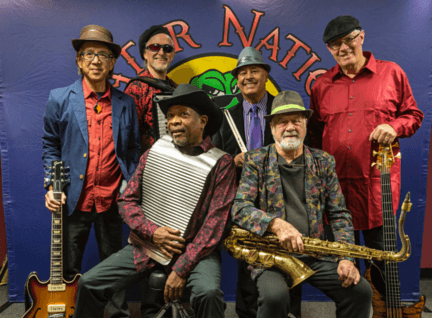 Gator Nation is a hand-clapping, foot-stomping, high energy concert and dance band. With an instinct for survival, Gator Nation continues to adapt itself to its audiences, always with something fresh yet true to its calling. That calling is to represent the music of South Louisiana in all its forms, Cajun, Zydeco, and New Orleans style R & B. They have the talent and diversity to do so, to express the nuances that define the genres.  The result is a remarkable show with so much variety and depth that at the end of the show, the Gator Nation Band leaves you happy and hollerin’ “the BEAT goes on!” 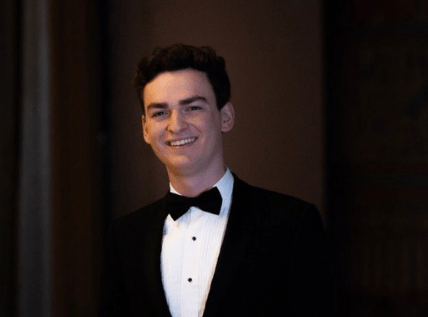 Shaymus Hanlin, the soon to be famous 18 year old vocalist from Coos Bay, Oregon, got his start with Evolution, from the Oregon Coast Lab Band and currently is the lead vocalist for Bay City Swing.

At 13 year Shaymus sang his first solo, I’ve Got The World On A String, at a school competition, and that was the start of it all.
He has since fallen in love with Jazz and the music of The Great American Song Book!

We are thrilled to introduce this young man to the big time as he will be featured in our Big Band tribute to “Frank Sinatra”. 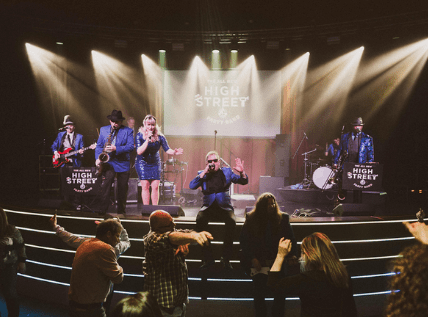 When attending one of High Street’s performances, be prepared for anything. You could even end up as part of the act, or with someone in your lap! In other words, these guys give it all and they give it every time.

You don’t want to miss a moment. It’s likely, however, that you may hear something written sometime after 1945. But hey, with all the fun you’ll be having and the energy in the room… even if you do care, you won’t notice. Expect high energy with a rock and roll flare. 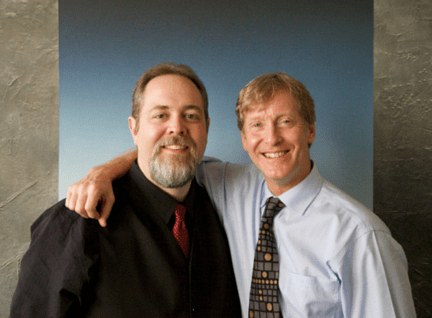 We are pleased to bring another new offering this year with world champion pianist Brian Holland & Grammy award-winning drummer Danny Coots. Holland and Coots will take you on a musical journey that radiates joyful bliss one moment and wistful lyricism the next.

These two guys have been tearing it up ever since they got together a few years ago and we know you will like what you see. You will hear hot ragtime, stride, boogie-woogie, blues, and jazz. Brian will also be featured this year on piano in the All Star band.

This brainchild of Mr. Barnhart’s may just be the most action packed group to have ever graced the stages in Sun Valley. We expect to see some excellent reviews from their performances.

This group of “at large” gunslingers is guaranteed to thrill any audience with the immense talent and the repertoire they collectively bring to the table. 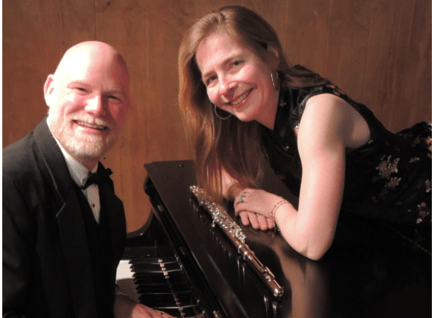 Praised by The L.A. Jazz Scene as a musical duo that can “draw out the beauty in the rich melo-dies and play the music…with taste, sensitivity, and a real affection for the idiom,” 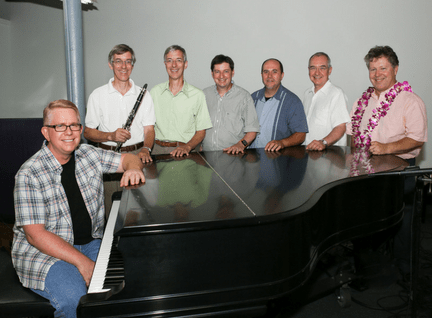 Talk about gifted brothers! Between the two of them, Joe and Paul play almost every musical instrument known to man. They feature the music of what most people consider to be the best small Jazz group of all time — The Benny Goodman Sextet.

You might also catch a Lionel Hampton tune or two. Tight arrangements and musical excellence make them a must-see. Goodman and Hampton ala Midiri. 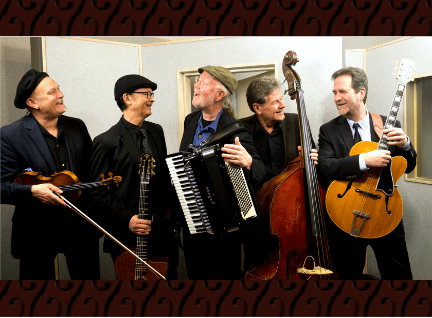 With a performance history spanning more than two decades, Pearl Django endures as one of the most highly regarded Hot Club style groups working today. Although the band’s roots are firmly in the music made famous by Django Reinhardt and Stephane Grappelli, its extensive repertoire includes traditional jazz classics and original compositions.

Pearl Django has performed at festivals, dances and nightspots throughout the U.S. and abroad. The band’s signature style is marked by pristine and dexterous string work, colors of Bal Musette, the steady pulse of rhythm guitar and an unmistakable swing that delights audiences of all musical sensibilities. 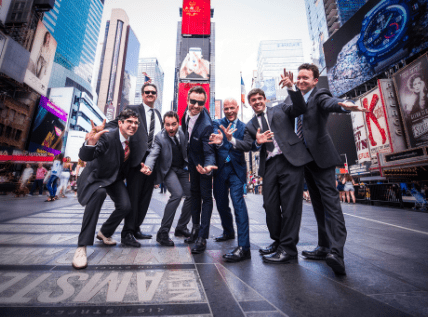 Jazz in the Square sponsored by:

Hot Jazz, Growling Horn, Grooving Rhythm – Professor Cunningham and His Old School is one of the most sought after groups on the international swing scene, performing around the world at major events and festivals. This award-winning New York based band performs the most swinging and grooving repertoire deeply steeped in the New Orleans tradition; from early jazz to early R&B in the aesthetic of Sidney Bechet, Fats Waller, Professor Longhair and even Fats Domino!

Formed and fronted by in-demand reedman and vocalist Adrian Cunningham – Australian native based in NYC, – Professor Cunningham and His Old School consists of some of the most energetic and accomplished musicians on the New York scene. It has been a regular hit in the NYC underground party and swing dance scene since it’s formation in 2012; performing at some of the world’s finest events- notably: Blue Note Jazz Fest (NYC), Snowball (Stockholm), Melbourne Intl Jazz Fest (Australia), CPLX (Copenhagen), Chase Festival (Heidelberg), Swing Crash (Como, Italy), Albany Jazz Festival.

Come get your dancing shoes out for this award-winning New York swing band!

Videos: At the Forum in Melbourne 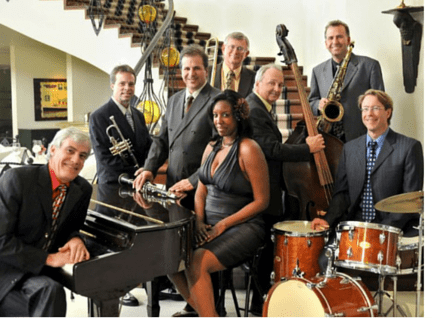 The Side Street Strutters have been busy presenting formal concerts, symphony pops programs and student outreach programs since 1983.  They entertained guests at the Disneyland Resort for 22 years and are proud to present “Shiny Stockings,” a new show featuring the vocal stylings of Meloney Collins.

Together, the Strutters and Ms. Collins borrow from their extensive repertoire of beautifully crafted arrangements, colorful costumes, tap dancing, exciting showmanship and musicianship to create a performance which breathes new life into melodies popularized by the great songstresses of the Golden Age of Jazz. A most enjoyable, rewarding musical experience! 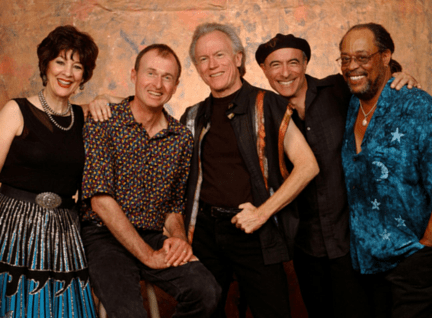 Tom Rigney, a fiery, electrifying violinist / composer, joins forces with some of the finest musicians on the San Francisco roots music scene to form Tom Rigney & Flambeau, a band that generates enough heat and energy to ignite a dance floor or lift an audience to its feet.

The above artists are scheduled to appear. Schedule is subject to change without notice.

Click HERE to Stay in Tune with periodic email updates