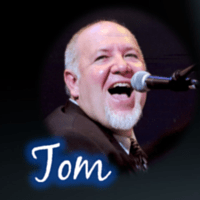 Musician songwriter Tom Hook began his career in Kansas City Missouri, performing in local in regional jazz and rock bands, as well as working as a stage performer at Worlds of Fun theme park. He was a founding member of the New Red Onion Jazz Babies, a regional “trad” jazz favorite.

Leaving Kansas City in 1980, Tom began a long association with the Delta Queen Steamboat Company, working as a lounge entertainer on board the Mississippi Queen until late 1984 when he assumed bandleader duties on the Delta Queen. During his 1985 tenure on the DQ, 1986 found Tom in Orlando, FL working as a staff musician at Walt Disney World.

While in Orlando, Tom also worked in Bill Allred’s Good Time Jazz Band at Rosie O’Grady’s at Church Street Station, and with his own vintage rock band, The Terrier Brothers, at the Orchid Garden. The Terrier Brothers assumed duties of relief house band at Lil’ Darlin’s Rock and Roll Palace in Kissimmee, FL where they appeared with the rock and roll legends of the fifties and sixties. During the same time period, Tom also had the unique opportunity to record a progressive rock project with Kansas City based Ancient Vision at Ian Anderson’s (Jethro Tull) studio in Barford-St, Michael, UK .

In 1987 Tom was a founding member of the Black Dog Jazz Band, an association that has led him over the years to appearances at most of the major Traditional Jazz festivals in the US, as well as multiple tours of Western Europe and a spectacular 1989 tour of Communist China. His association with the Black Dogs has also led him to a close connection with Jazzdagen Tours, and he has had the good fortune to make multiple cruises as a guest artist on their cruses, literally all over the world.

In 1990 Tom returned to the stage, portraying Sam the Bartender at the Diamond Horseshoe in Disney World. In 1992 Tom worked as music director at Main Street Station Casino in Las Vegas, and then returned to Delta Queen Steamboat Co as staff musician and band leader between 1993 and 1997. Tom assumed the roll of Cruise Director on the American Queen in 1998. In 1999 he returned to Disney World as a staff musician, and was one of the opening entertainment staff at Pat O’Brien’s nightclub at Universal Studios City Walk. Tom is the proud owner mof the coveted ‘golden Woody” awarded to City Walk’s premier entertainer annually.

In 2007 Tom formed Daymark Productions with associate Wes Payne, which produced and administrated the entertainment for the nine vessels of Majestic America Line for the following two seasons. In 2012 and 2013, in conjunction with Cruise Artistes, LLC, Daymark Productions produced three outstanding musical revues for the American Queen Steamboat Company.

Tom has continued to tour the world with multiple trips to Europe, the Mid-East, South America, Malaysia, and annual trips to Japan with Tom Fischer’s New Orleans All-Stars. He still participates in the West Coast Traditional Jazz Festival circuit, and makes annual trips to British Columbia. He recently co-wrote and starred in the “Big Easy Award”-winning production of “Jump Jive and Wail, the Music of Louis Prima” at the National World War II Museum in New Orleans.

When not on tour, Tom performs nightly in New Orleans and on board the American Queen and Queen of the Mississippi Riverboats with his own New Orleans All-Stars (fronted by legendary trumpet man Wendell Brunious) and with his own one-man stage production of the musical drama “Riverman!”. The All-Stars also make regular appearances at world renowned Preservation Hall.

Over the years Tom has performed as voice talent on various radio and television jingles for entities as diverse as the Kansas City Chiefs, Kansas City Kings, Budweiser, McDonalds, H&R Block, and Walt Disney World. Tom also has delved into the world of cyber entertainment, producing and recording period music for a series of war games developed by John Tiller for HPS Simulations.