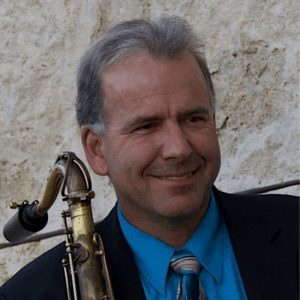 Rob Verdi received his musical training at Arizona State University.  After a year of teaching junior high band, Rob relocated to Los Angeles to accept a full time position with the Entertainment Division of the Walt Disney Company.  His jazz band, the Side Street Strutters entertained guests at Disneyland for 22 years and also presented formal concerts and symphony pops programs in theaters and performing arts centers throughout the US.

With his passion for saxophone history, Rob has accrued an impressive collection of rare saxes which he features on his touring show “Saxophobia”.  His latest musical project, “SAXsational” invites local music students to share the stage with him.  Rob currently performs at Disneyland and conducts jazz workshops for the Disney Magic Music Days guest talent program.  Vist Rob on the web at Saxophobia.