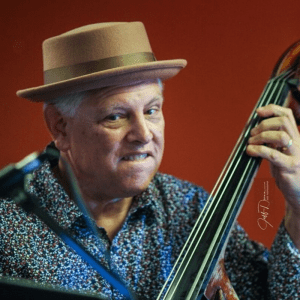 String bassist Paul Keller is a Michigan jazz hero; he loves his life in Saline, MI where he lives with his wife and two kids and performs locally – in Detroit and across his home state of Michigan. Paul wear many jazz hats: He leads several successful and busy jazz ensembles including his 27-year old, 15-piece big band The Paul Keller Orchestra; he’s an in-demand side man, a prolific composer, a creative and skilled arranger, an enthusiastic and innovative jazz educator, a recording company owner and producer, and a nationally recognized recording
artist. Paul can be heard every week at his home base – Zal Gaz Grotto in Ann Arbor (on Mondays with his PKO big band and on Tuesdays with the Easy Street Jazz Band).
Check out Paul’s website.

Keller spent several years on the road with guitarist Russell Malone and later with singer/pianist Diana Krall. Together with Russell and Diana, Paul recorded Diana’s Grammy nominated GRP/Impulse CD All For You. These days, Paul performs frequently with guitarist/singer and jazz super-star John Pizzarelli – they just toured Brazil for a week. Paul travels the world to play special concerts and festivals with a myriad of jazz stars including Jackie Ryan, Scott Hamilton, Larry Vuckovich, Benny Green, and Warren and Alan Vache.