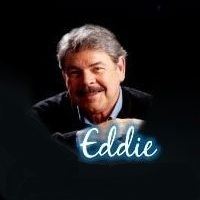 “The Singing Moustache.” “Fast Eddie” Erickson began his banjo/guitar career in the San Jose, California area in the mid ’60s, and moved to Monterey, California in 1969 to work at Capone’s Warehouse on Canary Row. From there Ed went to DisneyWorld and Disneyland, where he was featured in the “Class of ’27” show at the Diamond and Golden Horseshoes, and starred in the Banjo Kings as well. He has been a featured performer at banjo shows, conventions, private parties, jazz concerts, and has appeared with such noted jazz performers as Jackie Coon, Rick Fay, Dan Barrett, Dave Frishberg, Johnny Varro, and others. From 1978 to 1983, Eddie led the “Riverboat Rascals” show band on board Disney’s Empress Lilly Showboat. In recent years, Eddie has been featured with Big Mama Sue at festivals, fairs, and even the “Sancy Snow” Jazz Festival in France. Fast Eddie is a respected and loved member of the jazz fraternity, and one of the funniest performers on the scene.