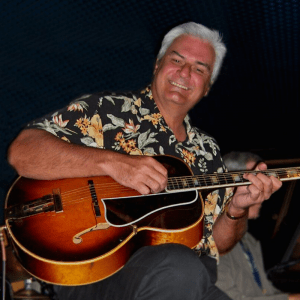 He’s had the honor of recording several CD’s with Woody Allen’s musical director, Dick Hyman, in New York; and singing and playing on more than 100 recordings with many of the most famous names in Dixieland music.

For the past 8 years, Bob has been a featured All-Star for the JazzFest at Sea, and the Jazzdagen, cruises. He has played jazz festivals in Tahiti, Germany, Holland, France, Britain, Canada, and the Caesarea Jazz Festival in Israel. In 2013, he’ll be working at jazz festivals around the United States, as an All-Star; with the Jim Cullum Band, and with The Midiri Brothers.

When he’s not traveling, Bob is based in Naples, Florida. He has performed onstage with the traveling company of Chicago(at the Naples Philharmonic Hall); played Hello, Dolly! (at the Barbara B. Mann Center in Fort Myers) with Carol Channing; and has also played several other Broadway shows, including: The Boyfriend, and the Three Penny Opera. After playing banjo, guitar, and uke for Thoroughly Modern Millie in the summer of 2009, he became a regular band member at the Sugden Theater of Naples for several seasons; playing Annie, Joseph and The Technicolor Dreamcoat, and 42nd Street.

Bob can also be seen weekly during the season at Erin’s Isle (in Naples), and at Sasso’s (on Marco Island).