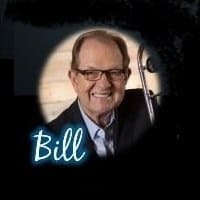 Bill’s musical legacy started, indirectly, in Louisiana. Bill’s grandmother Ida was born near New Orleans in the town of Franklin. His father, John, was a pianist and banjoist on many of the steamboats of the great “Strekfus Line,” playing in and around New Orleans as well as on the Mississippi and Ohio rivers.

Bill performed in College and the U.S. Navy Band and was a staff musician at opening day for Walt Disney World In Orlando, FL. His jazz performances have taken him to the major jazz festivals and concerts in the United States and abroad. He has appeared with Jack Teagarden, Billy Butterfield, Peanuts Hucko, Al Hirt, Clark Terry, Dizzy Gillespie, Mel Torme’, Al Cohen, Snooky Young, Bob Cooper, Milt Hinton, Bob Haggart, to mention a few. His big band experience includes The World’s Greatest Jazz Band, Billy Maxted and the bands of Bob Crosby, Tex Beneke, Buddy Morrow, Dick Hyman and Bob Wilber. For over 12 years, Bill toured and recorded as a member of the Wild Bill Davison Jazz Band. Bill’s CLASSIC JAZZ BAND is still active and touring nationally after 26 years. Vist Bill on the web at www.BillAllred.com.