“St. Louis Woman…..with all her diamond rings……” Some of my earliest memories are of hearing strains of W.C. Handy’s “St. Louis Blues” being played by my mother’s very musical family: my Aunt Arlene blowing alto sax, Auntie Sallie’s smoky voice, and Aunt Toot playing the sexy blues on piano. 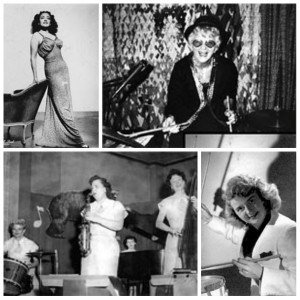 I was lucky enough to have cool musical role models to grow up with. My grandparents, Virgie and P.G.Turner, were born in the late 1880’s, and were both musicians. Virgie taught all her 6 children piano and P.G. was a fiddler who played and called all the square dances in their little town, Chilicothe , Texas. While Grandpa played Turkey in the Straw type tunes, his children were all swing musicians. My mother was the youngest and played drums and percussion. When the family came to town, the primary event, other than eating and drinking, was making music. [br] [br]  [br]

It was assumed that everyone would participate, even if it was just to clap at the end of a song. It wasn’t necessary to be good, just to participate. While I was always encouraged to play, my mother did not really want me to be a professional musician. She thought it was a “hard life.” I think part of this was based on her lack of knowledge of the “life,” and how one would make a living. 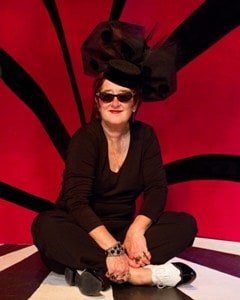 Perhaps the most professional of all my aunts and uncle (Uncle Douglas played trumpet), was Auntie Arlene. Arlene Turner migrated to California during World War II, and lived in Hollywood, with her girlfriend, singer Sallie Davis. While playing at gangster Mickey Cohen’s Continental Club , her drummer broke her foot, so she needed an emergency drummer. She ended up using Jerrie Thill, who had recently moved there from Iowa. She and Jerrie later both played with the Ada Leonard All Girl Orchestra, and went on to form a quintet, with Sallie Davis and 2 others, and tour the West Coast as The Biltmore Girls. While my aunts retired from the music business in the ’50’s and died over 20 years ago, Jerrie lived to be over 90 and I was lucky enough to meet her before she died . She filled in lots of the details I didn’t know and provided me countless precious pictures.

Growing up in an atmosphere of music appreciation, I have always associated music with the joys of life, the fun of life. My school friends that came over to the house in that period remember it well, as it was unusual. Probably the fact that there were so many women doing it too, was unusual. I learned to be inclusive and open, encouraging everyone to just play, and try it. I have my family to thank for that. “St. Louis woman, with all her store bought hair……”

Click here to Enter to Win the Party Favorites CD from Sue Palmer and her Motel Swing Orchestra.